Bill Tilton has been a Minnesota lawyer since graduating from the University of Minnesota Law School with a J.D. in 1977.  In over four decades of practice, he has obtained many superlative settlements and verdicts for his clients, with record results in several categories.  His practice focuses on personal injury and wrongful death matters, particularly medical malpractice.  He also has represented numerous doctors, nurses and other professionals in their licensing, credentialing, contracting and personal affairs.  Although Bill prefers dialogue over confrontation and settlement over trials, he has been lead counsel in jury trials in many categories, including major cases involving medical malpractice, auto accidents, products liability, murder, kidnapping, wrongful discharge, defamation, prison riot, and more.

Bill is certified by the Minnesota State Bar Association as a Certified Trial Specialist.  He received the “Minnesota Lawyer Attorneys of the Year” from Minnesota Lawyer newspaper in 2001.  He has been named a Minnesota Super Lawyer every year for many years by Minnesota Lawyer.  He has long been listed in Who’s Who in Personal Injury Law, published by Minnesota Law & Politics.  Bill’s firm has always been “AV-rated,” the highest rating available, per Martindale Hubbell Law Directory.

For over three decades, Bill has served as a volunteer attorney for Southern Minnesota Regional Legal Services, providing pro bono representation for qualified indigent persons.  For decades, he has been a member of the SMRLS Campaign for Legal Aid Fundraising Committee.  During the 2008 Republican National Convention in St. Paul, Minnesota, Bill and his partner, George Dunn, provided free legal representation for reporters and for the Reporter’s Committee for Freedom of the Press on behalf of members of the media who were subject to police arrest during the convention.

Bill is a former adjunct professor of law at William Mitchell College of Law.  He has helped educate other legal professionals by speaking at many continuing legal education seminars over the years.

Examples of news coverage of a couple of representative clients can be found in the following two City Pages articles: “The Silent Treatment” and “Til Death”.   In Minnesota Lawyer appeared “Verdicts and Settlements: Did Motion Practice Lead To Med Mal Settlement?”.  See also Star Tribune, “Mpls. attorney claims she was ‘oogled by scores of men'”.

Also of interest may be an article that appeared in the Pioneer Press, “Parallel Bars: Twin Cities Legal Eagles Could Easily Fill the Roles of TV’s Popular Law Firm Shows, ‘Ally McBeal’ and ‘The Practice,’” St. Paul Pioneer Press, November 30, 1999.  As the article notes, this was at the time when the leading legal show on television show was “The Practice,” starring Dylan McDermott in the character of Bobby Donnell, the founder and senior partner of the law firm featured on the program.  The Pioneer Press assembled a panel who picked those members of the Minnesota legal community who, in their opinion, were most similar to Bobby Donnell and the other characters on “The Practice” television program.  That panel, which included reporters, Appellate and Supreme Court judges and active lawyers, chose Bill Tilton as the Minnesota lawyer most similar to Bobby Donnell, the senior partner of the firm in “The Practice.”

For over 30 years Bill has acted as a Referee of Conciliation Court for Ramsey County, Minnesota.

Bill is Chair of the Board of Directors of Save Our Sons, St Paul, an organization devoted to assisting at risk St Paul youth, particularly from the black community,  who have experienced contact with the criminal justice system. Rosario: Not giving up on youths is still this former cop’s mission.  He is on the Board of Trustees of The Hmong American Education Fund, which provides educational scholarships and services to Hmong-American students seeking specialized educational camps, internships, higher education, graduate school, and professional schools. HAEF was begun with funds obtained in a wrongful death medical negligence settlement obtained by Tilton Dunn Gross on behalf of a family from the St Paul Hmong community.

For nearly 30 years Bill has endowed the Tilton Scholarship at Wolverine Human Services in Detroit, Michigan, a program dealing with abused, neglected, and delinquent children in the State of Michigan.   For several years, he endowed the Tilton Human Rights Fellowship given by and through the University of Minnesota Human Rights Center.

Bill was one of the founders of and for three years was Chair of the Board of Directors of the East Side Neighborhood Development Corporation, a multi-service neighborhood revitalization program on the east side of St. Paul.  Bill was also a founder and Chair of the Mississippi Whitewater Park Development Corporation.  This is a citizen-advocacy group which succeeded in raising millions of dollars towards planning for (but, unfortunately, not yet construction of) restored rapids suitable for whitewater rafting and kayaking on the Mississippi River at and below St. Anthony Falls in downtown Minneapolis.  He serves on other non-profit charity boards.

Bill Tilton is a St. Paul native.  He graduated from Cretin High School, class of 1965 and attended the University of Minnesota on a Great Northern Railway scholarship.  Before becoming a lawyer, he was proud to have been part of the social movements of the late 60s and early 70s, including civil rights organizing, the student power movement, the Woodstock festival, the first Earth Day, Hundred Flowers alternative newspaper, and more.  He was a part of anti-Vietnam War leadership, including being the Co-Chair of the Minnesota New Mobilization Committee to End the War in Vietnam, while also acting as Vice President of the Minnesota Student Association; student government at the University of Minnesota, while also being a member of Beta Theta Pi fraternity.

Bill found inordinate visibility in 1970 when he became one of the Minnesota 8 draft board raiders, a group which had intended to feed Selective Service records to the Mississippi River, and ‘Peace Crimes’ tells Minnesota 8’s war story.  He was convicted of “attempted interference with the Selective Service System” and sentenced to five years imprisonment, of which he did just over 20 months in federal prison.  During that time period, he even got his picture in Rolling Stone magazine a couple of times (but not the cover).  See Rolling Stone, March 16, 1972.    After his release, for some time Bill was a part of the community support team for the Wounded Knee Legal Defense/Offense Committee.   Then he went to law school at the University of Minnesota, where he served a year as editor of Quare, the law school newspaper.  In 1977, he became the first convicted felon to be admitted to practice law in the State of Minnesota.

Early in his legal career, Bill also worked in radio.  For several years he produced for Minnesota Public Radio (MPR) a series of programs entitled, “The Role of the Courts in a Changing Society.”  For that work, Bill won two national awards for MPR, the American Bar Association’s Gavel Award and the Ohio State Broadcasting Award.  Bill also for a number of years hosted KQ Scope, a listener call-in public affairs talk show which took place on Sunday nights on KQRS radio; see Star Tribune article.

What Promises Do You Make To Your Clients?

Bill has always had a special interest in international and comparative law.  He studied for a term of law school with the law faculty at the University of Ghana at Legon, near Accra, Republic of Ghana, West Africa.  Since becoming a lawyer, Bill has been a part of special lawyer/judge delegations/study groups to China, Cuba, and Israel.

In 2016 Bill was lead author of a successful petition to the North Dakota Supreme Court asking that the state loosen its pro hac vice requirements for practice by out of state attorneys needed to assist the hundreds of water protector protesters arrested in support of the Standing Rock Sioux Reservation’s protests of the Dakota Access Pipeline, see https://www.ndcourts.gov/court/notices/20160436/petition.pdf, https://minnlawyer.com/2016/12/23/pipeline-protests-north-dakotas-lawyer-shortage-and-bill-tiltons-solution, and https://waterprotectorlegal.org/wplc-wins-change-rules-state-attorneys-defend-water-protectors.

Bill has visited over 50 countries.  He has hitchhiked across the Sahara Desert “Across The Sahara, A Modern Pilgrimage” from Minneapolis Tribune, April 1978; summitted  Mount Kilimanjaro; gotten lost on the Inca Trail; paddled whitewater rivers on several continents, including the Colorado River through the Grand Canyon and the Upper Yangtze River in Tibet; survived cancer; coached grade school girls’ softball for IHM-St. Luke’s School; in the summer of 2007 spent weeks kayaking along the uninhabited arctic coast of northeast Greenland; circled Manhattan Island in a kayak in the Manhattan Circumnavigation, learned to meditate; and more. Bill is a volunteer driver for Meals On Wheels and a blood donor for the American Red Cross.

Bill looks forward to more years of helping people through the practice of law. 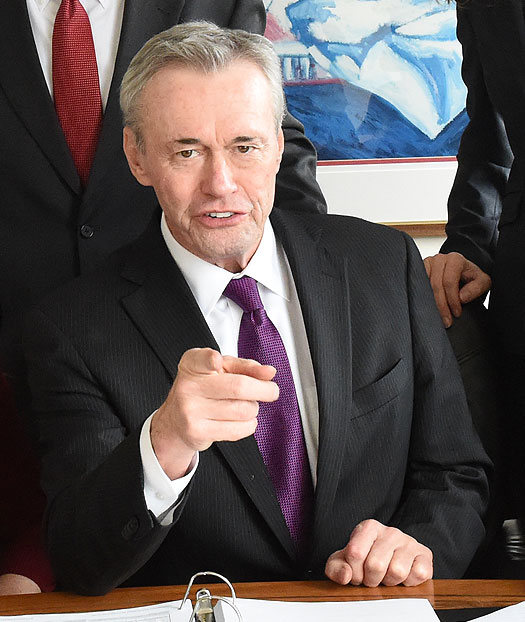